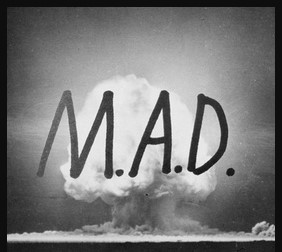 This topic is outwith the usual scope of this blog but last night’s BBC Question Time Q&A has me wondering how many of us understand how a nuclear deterrent is supposed to work.

During the Q&A there was some hostility to the idea that a putative Prime Minister (Jeremy Corbyn) wouldn’t “have the guts” to be the first to press the red button to launch nuclear missiles at an enemy. Mr Corbyn’s opponent, Theresa May, the current Prime Minister has previously stated that she is prepared to use nuclear weapons on a first-strike basis.

For those of you who haven’t thought too deeply about how a nuclear deterrent works, here’s a summary.

We have lots of nuclear missiles.

They have lots of nuclear missiles.

They (mostly) don’t know where ours are.

We (mostly) don’t know where theirs are.

This means that a first strike cannot remove the threat of one coming back at you.

If we press the button first we hit them, but not before they press their button which means they hit us.

There is no upside to this. There is no strategic gain. By pressing that button first you guarantee that tens of thousands of us will die, hundreds of thousands of us will be injured and poisoned, and, assuming that this exchange of missiles is bi-partisan and doesn’t trigger a global nuclear war, you guarantee that the rest of the world will treat you as a pariah state until the end of time.

The only rational purpose of nuclear weapons is deterrence: if you bomb us we will bomb you back.

This means that the only rational position in the button-pushing pecking order is second.

If you value your life do not vote for anyone who says that they are prepared to be first to push the red button because they are either a suicidal psychopath or they don’t understand the concept of mutually assured destruction.

War is failure. By the time we start throwing ordnance at each other we are all losers. There is nothing victorious about coming out on top: you’ve merely lost less than the other guy.

The only rational response to the presence of nuclear weapons on the planet is to dismantle them so that they can never be used.

Austria, via the United Nations, is leading a process that will make it illegal for anyone to have nuclear weapons. Last time I looked the proposals had the support of 127 nations.

Voting for a government that will help to make this happen is rational.

Voting for one that is prepared to press the red button first is not.

Do You Really Understand Money?

This book explains in plain english how money actually works, how we abuse it, and how we can make much better use of it.

"Our Money: how to shrink government, boost business, eliminate poverty, and make the economy work properly for everyone"

Available at Amazon in paperback and eBook.