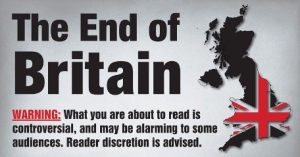 I made the mistake today of listening to a “video” from MoneyWeek entitled “The End of Britain”. Adverts for it had been cropping up regularly in the MoneyWeek daily email so, even though it looked suspiciously like they were trying to sell me something I sat through it and was appalled at the quality of the so-called journalism.

If you want to find out what’s in the MoneyWeek video I recommend you read the text in this article (the so-called video is merely someone reading it, badly).

And if you want a critique of the content you could do worse than read this article from Another Angry Voice in which Tom Clark highlights The End of Britain’s most egregious faults.

For those of you who have better things to do with your life than read the whole End of Britain article you can get the gist of the nonsense it contains from my email to MoneyWeek in which I unsubscribe from their mailing list, copied here in full:

“I have just wasted a significant chunk of my day listening to your “End of Britain” video (sic), which has utterly destroyed any credibility that you might have previously enjoyed.

Yes, we have a problem with debt in the UK but you have completely missed the root of the problem.

You see government spending as the problem without acknowledging that tax-and-spend, and borrow-and-spend, are effective ways of cycling money through the economy, which is exactly what the economy needs in order for it to thrive.

You fail to acknowledge that private debt, rather than public, is the real problem.

Your “video” is nothing more than mendacious fear-mongering that’s designed to entice unsuspecting investors into subscribing to your magazine and using the services of your commercial partners: telling lies in order to frighten people into parting with their money.

Please unsubscribe me from your mailing list and remove my contact details from your database. I have better things to do with my time than read the nonsense that you publish.”

2 thoughts on “The End Of Britain: Scaremongering Nonsense From MoneyWeek”

Do You Really Understand Money?

This book explains in plain english how money actually works, how we abuse it, and how we can make much better use of it.

"Our Money: how to shrink government, boost business, eliminate poverty, and make the economy work properly for everyone"

Available at Amazon in paperback and eBook.